These graphs show the relationship between the total area in hectares of currently licensed aggregate operations (up to 2009), the portion of the license that is presently 'disturbed' or under extraction, and the area being rehabilitated. As can be seen from the top graph, each year there is a large increase in licensed areas available for future extraction, with a much smaller amount becoming 'disturbed' or actively extracted. The lower graph shows a comparison between newly disturbed areas and newly rehabilitated areas. The rehabilitation is not keeping pace with extraction. This is why we must ask why more extraction is needed, especially on the Niagara Escarpment.

PitSense believes that we must re-evaluate society's relationships between our

aggregate industries, our aggregate users, our environment, and ordinary citizens

who currently suffer the harmful consequences without adequate compensation.

Our awakened environmental concerns and our new awareness of the costs, both social and economic, of the traditional relationship between the Aggregate Industries and society require us to do some fundamental re-thinking. Pitsense believes that REHABILITATION of PITS and QUARRIES is an important but too-often-neglected part of an aggregate operator's responsibilities.

Examples of effective rehabilitation do exist. The aggregate industry points to these with pride, but they also acknowledge that these occur only after 40 or 50 years of extraction. Moreen Miller of the Ontario Stone Sand and Gravel Association (OSSGA) spoke about the issue and how we must "stick it out for the long term". Unfortunately this means, for many of us, that we will suffer the negative effects for the rest of our lives and then maybe someday those who follow us will benefit from rehabilitation.

In May 2012 the Ontario Government began what we hope will be a comprehensive review and amendment of the Aggregate Resources Act. Many of the submissions contained recommendations for improvements to rehabilitation requirements. Typical were the recommendations made by Helen Purdy of Guelph. On P.47 of her submission she states:

"Thousands of pits and quarries in Ontario, either abandoned (approximately 7,900 sites or more) or under licence or permit, have not undergone progressive or final rehabilitation as required under the current Aggregate Resources Act, the former Pits and Quarries Act (1980), or a predecessor of these two Acts. A pit or quarry is considered abandoned if it was not licensed under the Aggregate Resources Act (1990). The failure to rehabilitate lands that have been extracted is ongoing and appears to have intensified over the last two decades for various reasons including the discontinuation of rehabilitation security payments and licensee and permittee rehabilitation accounts in 1996 by the Ministry of Natural Resources."

The issue of rehabilitation is fast becoming more prominent as a result of submissions made to the ARA review hearings that began in May 2012 and extended into the summer. An often repeated theme during those hearings was the need for a much higher degree of RECYCLING. Aggregate industry representatives saw this as an opportunity to press for the idea of using both active and depleted pits as industrial scale recycling facilities as well as potential receptacles for landfill.

These prospects are a very serious concern to PitSense and other groups in similar circumstances across the province. First, it totally discards any notion of 'interim use' which is mandated in virtually every pit license. It also presents serious environmental risks that the regulatory environment, the MNR, and pit owners are ill-prepared to deal with. The introduction of 'foreign' materials into pits and quarries, along with who-knows-what toxic contaminants, sounds numerous alarm bells.

We are watching these developments carefully and documenting our concerns. A recent article from myKawartha.com is a perfect example of what can occur. Even with the best of intentions and qualified operators, damage can result. The story is basically this: Green For Life (GFL) a well known waste management company is providing tonnes of 'remediated' fill being hauled to a former gravel pit owned by Cindy Brigden. She wants to restore the land to its pre-gravel pit status, and her efforts have annoyed several neighbours upset with the dust and noise from dozens of dump trucks hauling in the fill. Within months, contamination has been discovered. Is this now a case of trying to close the barn door after the horses are gone? And how much monitoring and testing will be needed to do this sort of job properly in perpetuity? And by whom?

So many serious questions! We need to remain alert and require our elected officials to do likewise.

In addition to the topic of RECYCLING, PitSense is monitoring developments in the area of LANDFILLS and excess construction soils disposal. According to a study released last July by the Residential and Civil Construction Alliance of Ontario (RCCAO), millions of cubic metres of soil will have to be trucked from construction projects to disposal sites in Ontario over the next decade or two. Since most of this construction occurs in the GTA it is increasingly apparent that gravel pits and quarries are being viewed as potential receptors for this fill. This is obviously a potential source of additional revenue for pit operators and municipalities and they are actively lobbying for licensing and regulatory changes that would permit such extended usage. These changes would serve to extend the life-cycle of pits, perhaps indefinitely and certainly well beyond what is envisioned by the 'Interim Land Use' designation presently accorded to pits and quarries. The rehabilitation costs that would commonly be incurred would also be avoided.  See article HERE.

We at PitSense heartily endorse increased usage of recycled materials for infrastructure improvements and construction projects. We also believe there are many examples around the world that can guide our implementation of increased usage. One good example is in the Netherlands where Kleemann has built a turnkey recycling plant. Europe’s largest recycling plant is located in the vicinity of Amsterdam’s Schiphol Airport. This plant was designed and built by Kleemann for processing demolition waste, demolished concrete and asphalt into high-quality aggregate for the construction industry. It includes, among other units, Kleemann’s largest impact crusher model SHB 20/160. The recycling plant has a feed capacity of up to 700 tons of material per hour. One year of planning, construction and assembly was needed before the new recycling plant was put into operation. To protect the environment from dust and noise, the entire plant was subsequently enclosed with a trapezoidal panel construction.

We oppose the scattered approach pursued by the aggregate operators in Ontario who want to locate limited capacity recycling operations in a wide variety of locations, many of which are in rural residential and/or environmentally sensitive areas. This approach does not take advantage of the significant economies of scale inherent in the Netherlands example. It also becomes far more difficult or impossible to obtain a consistent product and effective monitoring of the processes.

A U.S. study indicates that in order to

realize economies of scale, a plant should

process at least 110 – 275 tons of debris per hour, and in order to produce a reasonable

return on investment, the plant should process and sell no less than 200,000 tons of recycled aggregate per year. This implies that urban areas of at least 1 million people are needed to support the operation of a concrete recycling plant. There are no reasons to believe that this requirement would be substantially different in Ontario.

If we want to ensure the maximum utilization of recycled materials we must process the material in the most effective, economical, and socially responsible manner possible. Large scale operations, appropriately located, are an excellent way to proceed. 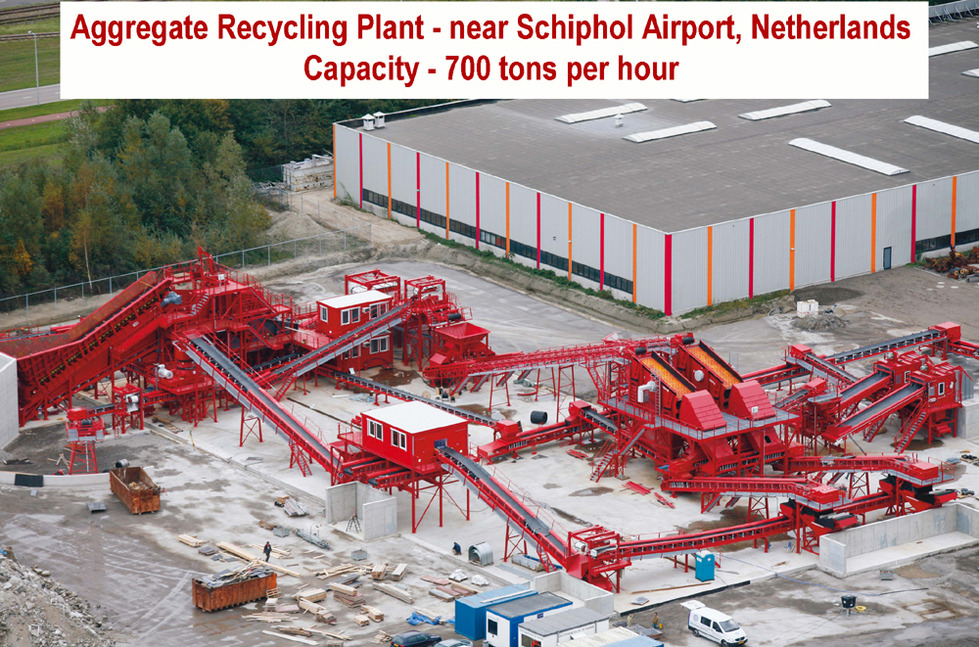 Increasingly, on-site or at-source recycling is favored because it reduces haulage expenses and hazards. Transport to and from a central facility is avoided, particularly where the product is re-used in the re-development occurring at the same site. Both Mobile and Portable recycling plants are utilized, depending on the volumes to be processed.

This approach is superior to what is being proposed by Ontario pit and quarry operators, where we would have numerous limited-capacity plants requiring haulage of unprocessed debris from demolition sites, and storage of contaminated materials in or near sensitive environmental areas not suited to Class III industrial activities. 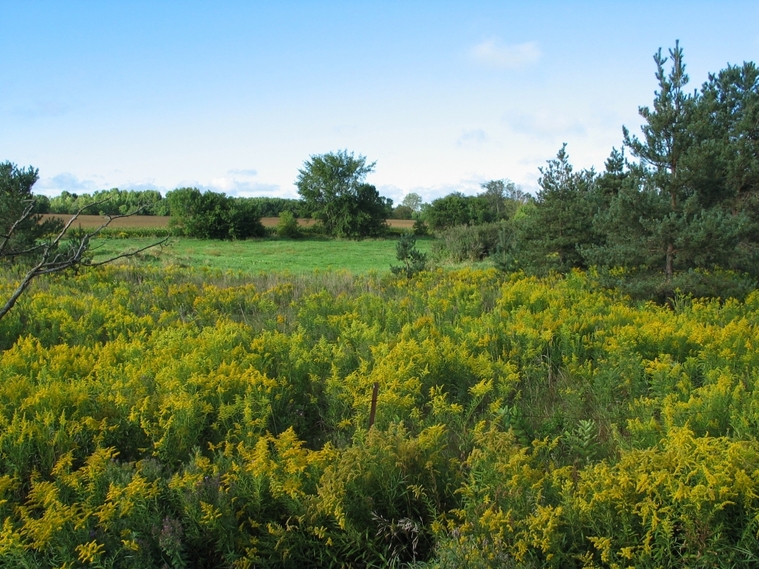 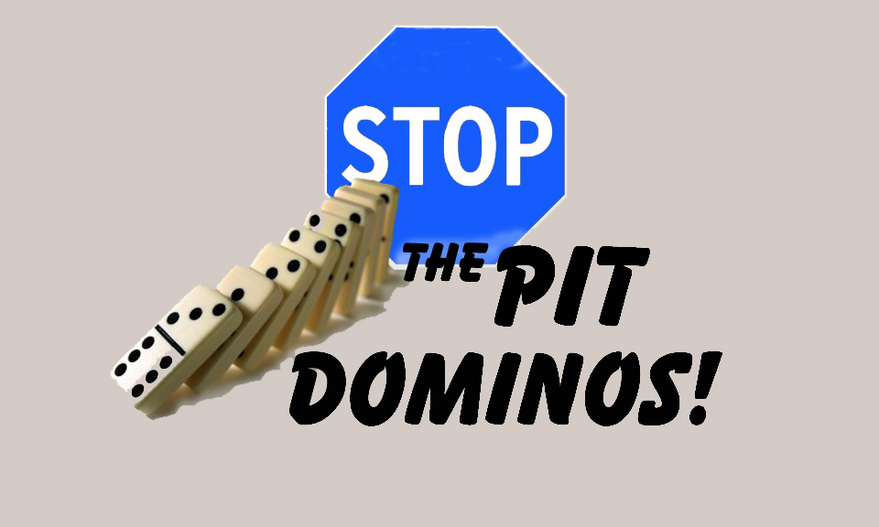 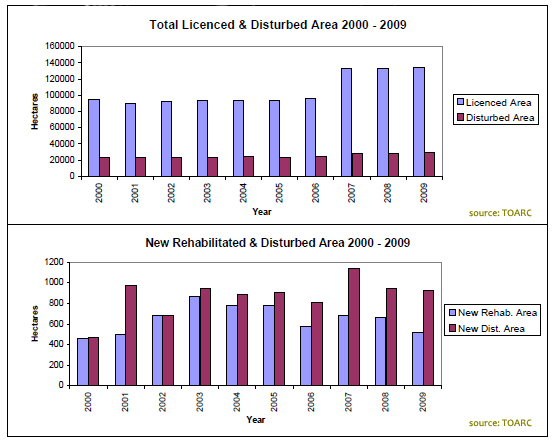 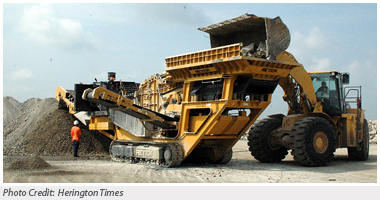